Hosts Turkey opened the 2021 International Blind Sports Federation (IBSA) Goalball European Championships A in style on Friday (5 November), claiming wins in both the men’s and women’s competition in Samsun.

The competition is available live at goalball.sport between 5-12 November. The schedule and results are available at the Championships website here.

Friday saw the start of five days of group play at the Yaşar Doğu Sport Hall as teams go for the title just three months after the Tokyo 2020 Paralympics.

The Turkish women were in great form against Denmark, showing no signs of slowing down after their gold-medal winning Paralympic campaign.

Turkey opened the scoring with just their second shot of the game. Star striker Sevda Altunoluk was once again at the forefront of their attack.

Altunoluk bagged five goals in the first half, but Denmark made it to the buzzer to stay within two goals of their opponents. Anja Christensen led the scoring for the Danes.

Into the second half and Christensen was the first to score, reducing Denmark’s deficit to just one goal.

However Altunoluk had different ideas, teaming-up with Fatmugul Guler who grabbed two goals of her own to bring the final score to 9-5.

The Turkish men also opened with a 10-3 win over newly promoted Greece.

A low-scoring first half ended 2-0 to Turkey who went on to find their groove in the second.

Ebubekir Kara added three goals as Greece’s Athansios Chatzipantou, who was the driving force behind team’s promotion to Pool A in June, could not find his momentum.

Eight strikes came for Turkey, including two for Tuncay Karakaya who joined Kara in peppering the Greek net.

Defending champions Germany triumphed 6-4 over Montenegro, another newcomer to Pool A.

Montengro gave Germany an early scare, taking the lead courtesy of Mimes Ramovic. Oliver Hoerauf and Reno Tiede then stepped into the breach for the Germans, registering a combined three goals to lead by one goal at the buzzer.

Germany added another trio of successful shots in the second half with Fabien Diehm joining the party.

Montengro’s Nikola Nikolic got himself on the board with two goals, but it was not enough. 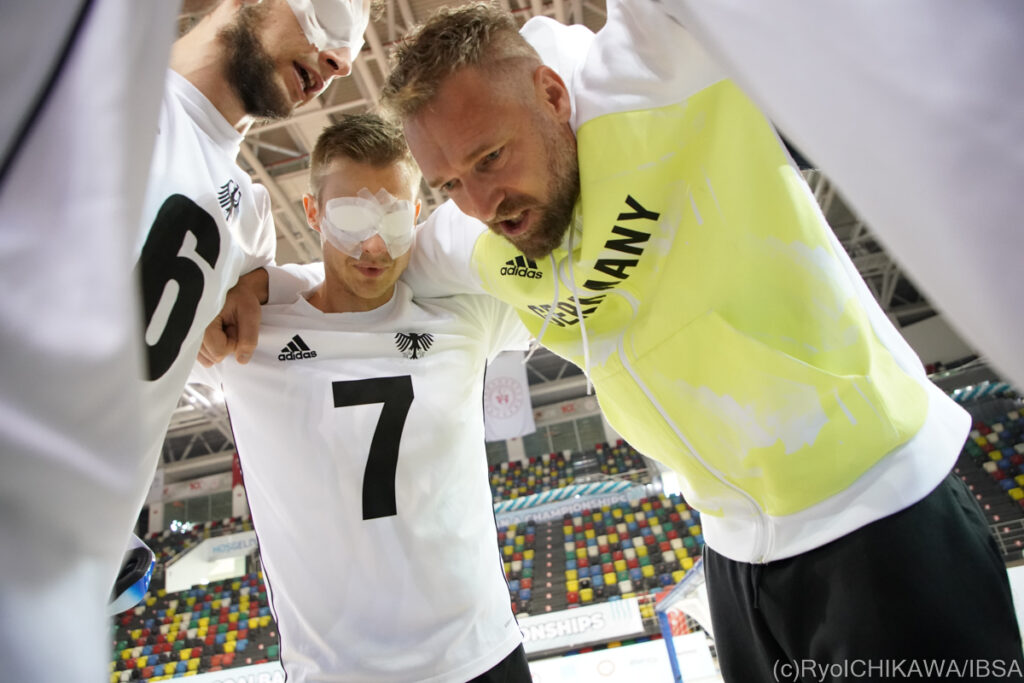 Rio 2016 champions and Tokyo 2020 bronze medallists Lithuania got their Samsun 2021 campaign underway with a storming 13-3 mercy win over Spain.

Justus Pazarauskas found the net five times in the first half alongside Nerijus Montyvydas with three. Arturas Jonikaitis added two after the re-start, as did Normantas Prusinskas, before Montyvydas sealed Spain’s fate.

Ukraine just edged past Russia, showing their relentless thirst to achieve a major title after an incredible few years climbing the divisions and qualifying for their first Paralympics.

A low-scoring first-half ended 3-2 to Russia. After half-time however, Ukraine were a side transformed and managed an impressive seven goals to Russia’s three. Rodion Zhyhalin – Ukraine’s serial top scorer – found his form to score six.

Newly promoted France showed-off their defensive game in the first half against 2019 silver medallists Israel.

The Paris 2024 hosts are in the ascendancy with new focus being placed on goalball in France. The investment seemed to be paying off as they held Israel to a 4-2 scoreline at half time.

Realising they needed to put some clean air between themselves and the French, Israel turned on the style after the break.

Ori Mizrahi reached a hat-trick three minutes in without reply, to bring Israel’s total to seven. Mizrahi then added another before Gal Hamrani and Lihi Ben David concluded the scoring with 17 seconds left on the clock. The final score was 10-3, with France adding one more goal in the second half.

A close, tactical game between Great Britain and Finland ended with the Scandinavian side taking a 5-3 victory in their first game of Samsun 2021. Krista Leppanen was their top scorer, doing enough in the first half with four goals as Great Britain struggled to break the Finnish defence.

A tense and tactical clash between Germany and Greece ended with a rare 0-0 scoreline in the final match of the day. Both sides were solid in defense and mistakes were few.

Pool play continues in Samsun until 9 November ahead of the quarter-finals on 10 November. Semi-finals and placement games for fifth-eighth place are on 11 November. The medal matches are on 12 November.