Home / News / The birth of blind football in Malawi

The birth of blind football in Malawi

Malawi took a historic step in 2019 when it hosted its first regional training camp for blind football coaches.

The country is riding the wave of the wider development of the sport in Africa and wanted to get in on the action. Cue Sight 2020 Direct – a charity that has introduced blind football to Malawi and is hoping to organise the country’s first national blind football championship.

Sight 2020 Direct was formed in 2001 by Andrew Feyi-Waboso, an ophthalmologist based in Wales, with the aim of providing eye care services to communities in Africa. His wife Sally, an occupational therapist, helped to broaden the scope of the charity, which now also focuses on providing support to those with irreversible sight loss.

They were particularly keen to work with youngsters with visual impairments, which inspired the charity to get involved with blind football.

We know sport for visually impaired children is virtually non-existent in Malawi. We decided to support the introduction of blind football and introduce it to schools beginning with one school at a time.

Andrew and Sally received training from the Royal National College for the Blind, and local football teams donated kit and equipment. A pilot programme took place at the Montfort Special Needs Education School in Nguludi. It proved to be a huge success with many children with visual impairments enrolled. They were divided into groups and the Feyi-Wabosos, assisted by physical education teachers, worked to build their confidence and get them used to running, movements and the ball.

This work, which started in 2014 and has resulted in annual events for blind football and the first coaching camp in 2019, is the first step towards a achieving a bigger ambition – competing on the international stage. 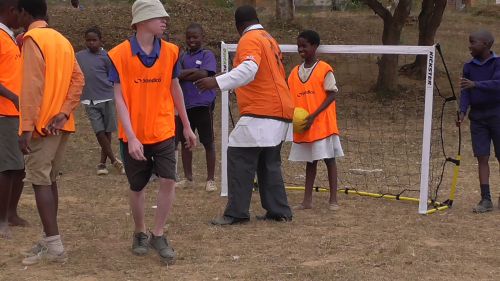 Malawi has not yet been able to play any tournaments or championships. When the sport is more widely known, we hope that Malawi will be confident enough to send a team.

With the pandemic around, practical sessions and skills training for students have been put to a halt and the 2020 coaching camp had to be postponed:

There are many challenges with school closures and our inability to travel to the schools to conduct training and follow up on the teachers who have been trained to introduce blind football in their respective schools.

By Sarah S Nasir
For IBSA