More than 130 judoka from around 20 countries are preparing to take to the tatami for the final International Blind Sports Federation (IBSA) Judo Grand Prix before the Tokyo 2020 Paralympic Games, in Warwick, Great Britain.

Competition gets underway on Saturday (18 June) and is the last chance for athletes to secure world ranking points which will determine qualification for the Paralympics.

All the action will be broadcast live from the University of Warwick at the IBSA YouTube Channel – click here to watch and set reminders for each session.

Hosts Great Britain are fielding a team of six judoka including men’s up to 100kg world No.1 Chris Skelley and World Championships bronze medallist in the up to 90kg, Elliot Stewart. 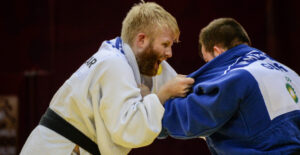 Skelley recently spoke about how the break away from competition had benefitted him as well as the increasing depth of his weight category.

“Judo is built on respect and is called the gentle way, as much as it doesn’t look like it,” Skelley said. “On the mat you want to rip each other’s head off and try and beat each other, but when off the mat we’re gentlemen and we respect each other. Although I do want to rip their heads off and beat them at the end of the day we’re all going through the same thing.”

Skelley’s main rival, Paralympic champion from the category below Zviad Gogotchuri, has not made the journey to Great Britain, but a series of other world top 10 judoka have. The USA’s Benjamin Goodrich, Germany’s Oliver Upmann and the Uzbekistan pairing of Sharif Khalilov and Sulaymon Alaev will all be tough to beat. The world’s most decorated Paralympic judoka, Brazil’s Antonio Tenorio, will also line-up.

In the men’s up to 90kg Stewart will also face a deep field. Ukraine’s world and European champion – and Rio 2016 silver medallist – Oleksandr Nazarenko is likely to threaten for the podium. French European silver medallist Helios Latchoumanaya could also be in the mix. 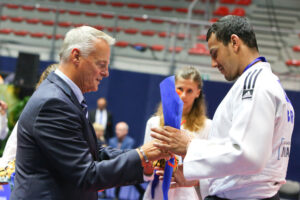 In the women’s Brazil’s Meg Emmerich returns after winning her first Grand Prix in the over 70kg in Baku, Azerbaijan, last month. Emmerich overcame Italian Worlds bronze medallist Carolina Costa for gold and the pair could face-off again in Warwick.

Paralympic champion Lenia Ruvalcaba of Mexico and Brazilian world title holder Alana Martins once again headline the up to 70kg. In Baku Ruvalcaba faltered and was knocked-out early whereas Martins powered through to the final, and won.

In the up to 48kg, France Sandrine Martinet will make her first appearance of the season. The Frenchwoman claimed gold in Rio in the category above before switching down and securing the European title in 2019.

The 2021 IBSA Judo Grand Prix runs from 19-20 June and is the last official competition before Tokyo 2020. It is being run according to IBSA Judo and International Judo Federation requirements for COVID-safe events, as well as those of the British government. No spectators will be allowed to attend but the competition will be shown live across IBSA and British Judo platforms as well as on Channel 4’s YouTube.