The long-awaited return to the Paralympic goalball court took place at Tokyo 2020 on Tuesday (25 August), with men’s and women’s team getting into the groove at the Makuhari Messe.

Results are available at www.goalball.sport alongside live coverage and pictures for editorial use can be downloaded here.

Brazil shook things up in the men’s as they overcame defending Paralympic champions Lithuania 11-2.

Josemarcio Souza, part of Brazil’s bronze medal winning side on home soil five years ago at Rio 2016, impressed as he fired home three goals in the tournament’s opening game. 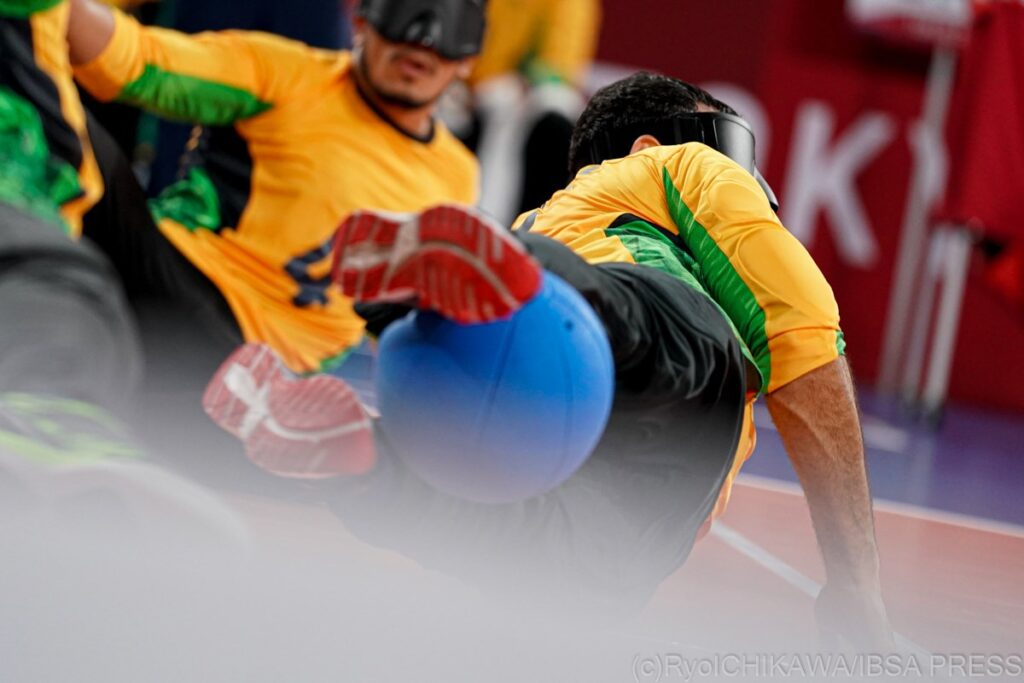 Lithuania will be disappointed, losing out on points despite fielding an experienced side with all but one player winning gold last time around.

The Japanese men claimed an impressive win as they swept aside Algeria 13-4. Kazuya Kaneko fired home five goals to the delight of his teammates, venue staff and volunteers.

The Japanese No.7 recognised the impact that the schoolchildren who were allowed to watch had on the team and equally, the lessons they could learn from goalball.

“Their support helped us a lot but I also wanted them to listen to our communication because in goalball, communication is everything,” He said. “I feel a sense of responsibility which I am excited about and it is important I set an example for them.”

Japan’s African champion opponents can take heart from the display of Samir Belhouchat who scored three of their goals.

Germany secured a vital opening win in a nail-biting encounter with Turkey which saw them only claim victory late on despite having raced into a 4-0 lead.

Missing three penalties looked as though it might cost them as Turkey fought back to 5-4 in the dying minutes, but Michael Dennis finally ended the penalty drought to grab his fourth goal.

The importance of being able to survive a tight encounter was not lost on the German star:

“It was really important to win like that and show we can win close games. We have been growing as a team for a while now with four of us competing in Rio so we have a generation here that can fight for a gold medal.”

The Japanese women’s team, the London 2012 gold medallists, also had their first outing on Tuesday and faced a tough challenge in current champions Turkey.

Only Sevda Altunoluk remains from Turkey’s gold medal winning side in Rio five years ago and she led by example here, scoring four times as her powerful shooting was too much for the hosts.

The USA, six-time Paralympic medallists, started strongly by seeing off Brazil 6-4 with Amanda Dennis scoring a hat-trick and Eliana Mason netting a brace.

On their Paralympic debut, the Russian Paralympic Committee (RPC) showed no signs of nerves as they eased past Canada 5-1 in their group C encounter.

Irina Arestova, who had scored 30 goals in their 2018 World Championships triumph, netted a hat-trick, with Arina Gerasimova and Anastasiia Chudina also getting on the scoresheet.

Canada did avoid a blank scoresheet thanks to Emma Reinke’s late effort, the left winger making her first Paralympic appearance after being an alternate at Rio 2016.

Israel inflicted a 11-1 mercy win over an developing Australia side who had Brodie Smith and Amy Ridley featuring in their maiden Games.

Lihi Ben David was the star for coach Raz Shoham’s team as she netted six goals to demonstrate her importance to the 2019 European Championship silver medalists.

Goalball continues on Thursday with the next day of group play.