Home / News / Goalball: Burk – “I was scared right from the start!”

Goalball: Burk – “I was scared right from the start!”

Playing sport at the highest level requires superhuman amounts of guts and courage.

This is no truer for any game more than goalball where players literally have to throw themselves, and lie down, in the path of a 1.25kg ball travelling at high speed.

It was this combined with the reputation of a former Canadian player which initially got in the way of Canada’s now three-time Paralympian Amy Burk’s path to the goalball court.

“I was scared right from the start,” Burk said. “Contessa Scott (a two-time Paralympic champion) was still playing and I said there was no way I was going to lay down and let her hit me with a ball that fast. The next year I gave it a real chance and fell in love with it.”

Canada are surely pleased that Burk took the leap. She has been part of a team that claimed gold in the 2006 and 2011 International Blind Sports Federation (IBSA) Goalball World Championships and bronze at the 2019 Parapan American Games. 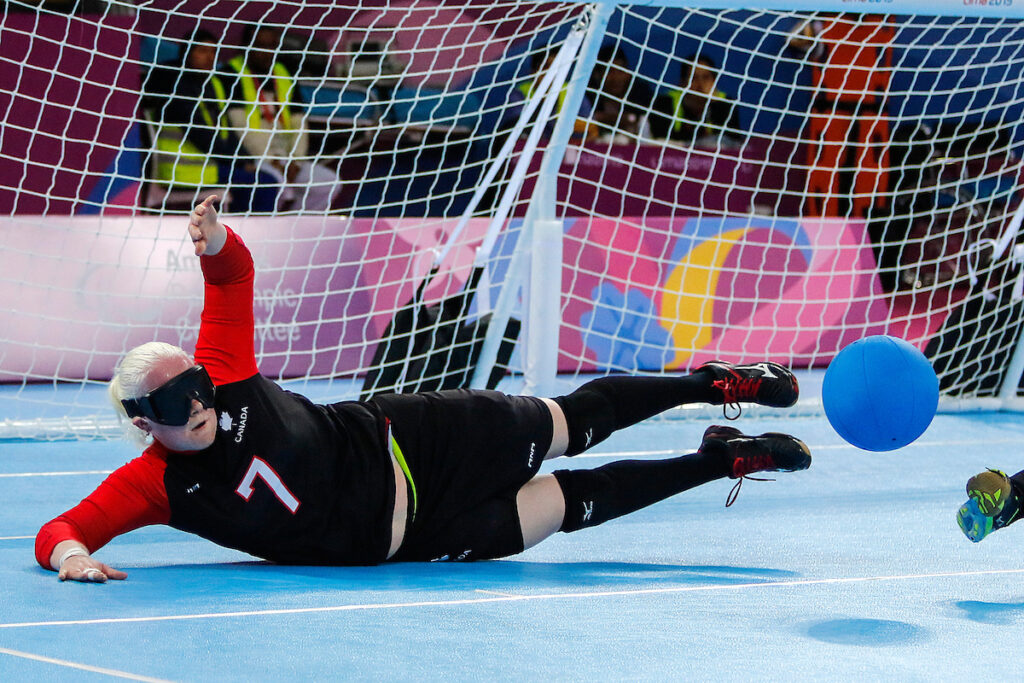 But Burk’s courage and determination does not only show itself during major tournaments. The Canadian is also a mother to two children, juggling the demands of home life, training and competing.

“It’s been very hard but I have such an amazing support system behind me. My husband takes time off work when I am traveling for training and competitions. My in-laws have also helped a tonne with watching the kids and my mom flies up from (Prince Edward Island) when she can to also help. I would not be able to do what I do without worrying if it wasn’t for this amazing group of people.”

Despite having competed at the 2008, 2012 and 2016 Paralympics, it was basketball, not goalball, which was initially the sport Burk played as a youngster.

“Before goalball I grew up playing basketball. In grade 7 I realised I only had time to do one of the two. I loved playing both but realised due to my visual impairment I would never get very far with basketball.”

Connections often help in sport and for Burk it helped that her teacher was working with the Canada goalball head coach.

“I had an itinerant teacher who was working with the PEI head coach (who was also Canada’s head coach at the time) and told him about me and how I just love sport. They sought me out and he introduced me to goalball.”

After a period of uncertainty around her classification status in 2015 in the build up to the Rio 2016 Paralympics where she eventually competed, Burk was able to once again call upon her courage and resilience when Tokyo 2020 was postponed.

“For the games in Tokyo it’s been the same mindset. I just needed to keep the mindset that the games were going ahead and if we found out later that they were cancelled then so be it at least I was prepared and ready. In order to help my team I need to be at my best and that’s what I am willing to do.”

It is always said that the best teams have a great togetherness and Burk believes this is the case for Canada.

“This is a great team and I am honoured to be a part of it. The love and respect we have for each other is one of the greatest things you can have in sport.”

The Tokyo 2020 Paralympics open on 24 August with goalball getting underway a day later. Canada’s women will play their opening game against The Russian Paralympic Committee in group C on 25 August at Makuhari Messe Hall C.