A dramatic end to the final day of group play in goalball at the Tokyo 2020 Paralympics saw European champions and Worlds silver medallists Germany eliminated from the competition.

The final standings in the men’s Group B were only decided on goal difference after all five teams finished on two wins and two losses each.

China claimed a stunning 8-3 win over the Germans to set up a quarter-final against hosts Japan and consign their opponents to an early exit.

After a rare goalless opening period, it was a goal-laden second half as Mingyuan Yang scored seven times, and China will renew their rivalry with their fellow Asian side Japan who beat them 8-3 in the 2019 Asia-Pacific Championships.

Germany were unfortunate to be eliminated despite winning two games but ultimately paid the price for a couple of heavy defeats, having also lost by six goals to Ukraine earlier in the tournament. 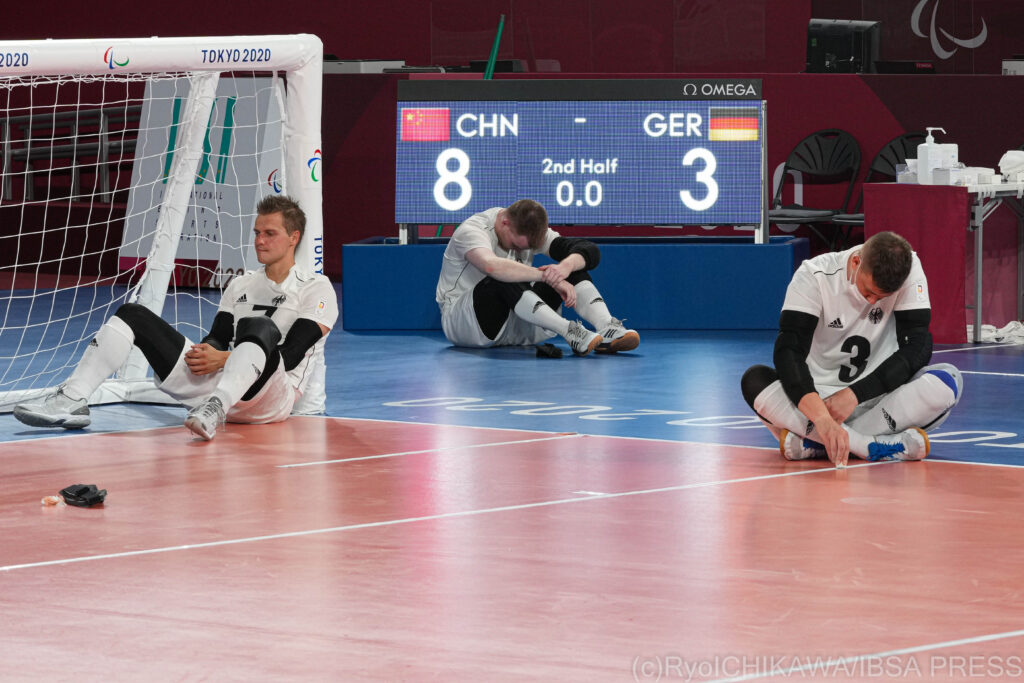 Turkey secured their place in a second consecutive Paralympics quarter-final by beating Ukraine 1-0 in a tight contest.

Despite losing their first two matches, a solitary goal from Tuncay Karakaya proved enough to book a last-eight clash with Brazil.

They last met Brazil at the Games in 2012 when they secured a 4-1 group stage win on their way to pipping their opponents to top spot.

The only debutant in an experienced Turkey side, Ebubekir Siddick Kara, paid credit to his teammates after securing their first win over Ukraine in nine matches.

“Tuncay (Karakaya) and Huseyin (Alkan) are very experienced players, they are at their third Paralympics and they have taught me a lot and not to give up hope after losing our first two games.”

Despite Ukraine’s loss, they finished second in group B due to Germany’s defeat to China. They will face USA in the last eight in the first ever Paralympic meeting between the two sides.

In a rematch of the last Paralympic final, defending champions Lithuania beat the silver medalists the USA 13-3 by mercy to claim their first win of Tokyo 2020.

This meant they avoided an unwanted early exit, with Nerijus Montvydas scoring five first half goals and will face Belgium in the last eight, their first meeting at a major tournament since losing 9-2 to the Bulls at the 2018 World Championships bronze medal match.

Lithuania’s Genrik Pavliukianec believes this vital win will help the team as they look to repeat their success of five years ago.

“I’ve always had confidence even when at some points things don’t work as they should but I always trust myself and my teammates.”

The defeat saw the USA finish third in Group A meaning they will face Ukraine, one of the upcoming sides in the sport, for the first time at the Paralympics.

Brazil set up a mouthwatering last eight clash with China as they eased past Egypt with an 11-1 mercy win.

Jessica Gomes scored eight goals to give Brazil their sole group stage win, which will result in a repeat of the Rio 2016 semi-final that China won by just one goal.

In their first Games, Egypt failed to claim a point and suffered three mercy defeats but the African side have only been competing at regional Championships since 2016.

A 4-2 defeat for Canada against China saw them knocked out of the competition, having picked up just three points.

Coach Trent Farebrother knew that only a win would do but they found themselves 3-0 down at half-time and despite an improved second half, suffered an early exit for the first time since 2008.

Amy Burk scored Canada’s second and despite the defeat she was proud of the resolve her teammates’ showed.

“It was definitely not the start we needed but the big thing about this group is that if we make a mistake, we drop it and don’t carry it forward which is a huge difference from the past and we just never gave up.”

“You learn a lot from the big games that you lose and we’ve had a rollercoaster of emotions this tournament but we’ll tear this game apart and learn from it.”

In contrast, China were already assured of their place in the quarter-finals and this win sees them top group C and face Brazil in the last eight.

China have claimed victories over Brazil in the previous two Games in differing circumstances with an 8-0 group stage win in 2012 followed by a 4-3 victory in the 2016 semi-final.

The USA beat Turkey 4-3 in a rematch of the Rio 2016 semi-final, to finish second and set up a quarter-final against the Russian Paralympic Committee (RPC).

Five years ago, Turkey claimed a remarkable 11-1 victory but this time around, despite trailing 3-2 at half-time, the USA turned it around with an Amanda Dennis brace.

This will be a first ever Paralympics meeting between the sides but both have recent international pedigree. The USA claimed bronze at Rio 2016 while the RPC earned a first major title at the 2018 World Championships.

Despite this defeat, Turkey still finished top of group D. They will play Australia in the knockout stages, who they beat 12-2 in their last Paralympics meeting in 2016. However Sevda Altunoluk is the only player remaining from that triumph.

The other women’s quarter-final will see Israel face hosts Japan as the former hope to reach a first Paralympic semi-final. Israel lost to Turkey at this stage five years ago while Japan also lost in the last eight at Rio 2016 against China.