Brazil, Turkey golden in goalball on magical night at Tokyo 2020

Brazil and Turkey are the new respective men’s and women’s Paralympic champions following wins on the final day of goalball action at Tokyo 2020 on Friday (3 September).

Results are available at www.goalball.sport alongside live coverage, and pictures for editorial use can be downloaded here.

Competing in their second final having finished runners-up behind Finland at London 2012, this was a completely different performance. Brazil showed impressive defensive resilience in the first half before showing why they scored 60 goals in just seven matches.

Only losing one match, against Rio 2016 silver medallists the USA, it has been an outstanding tournament from Alessandro Tosim’s side. They also beat Lithuania, gold medallists from five years ago, twice including in the semi-final.

Sousa said: “We are grateful for everything who has helped us achieve this result as it’s been a long time coming. All my teammates, and the coaches and staff who help us everyday.”

Moreno continued: “I started to play goalball in 2007 and many people have helped me play it for my career and I especially have to thank my two brothers who have always had advice for me. This medal is for my brothers and my family.

“I want to spread this fantastic dynamic sport throughout the world, especially the people who are visually impaired.” 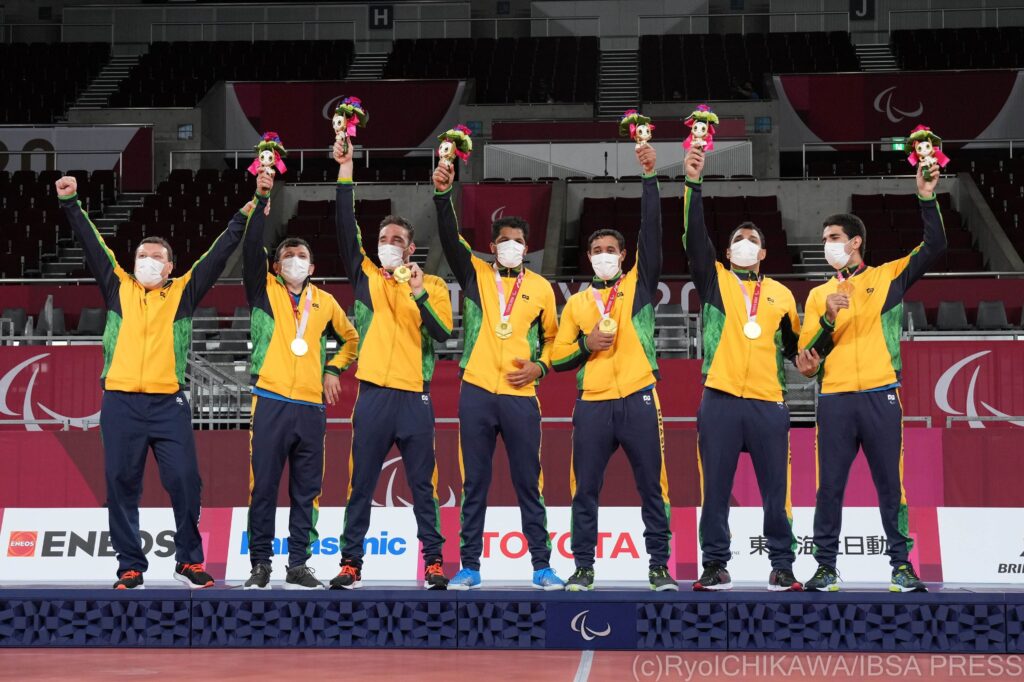 For China, a silver medal, only their second medal in Paralympic history, marked an impressive turnaround after they only just got out of their group.

For Yang, there is personal pride in finishing as joint top scorer as his side earned notable victories over hosts Japan and Rio 2016 silver medalists the USA in the semi-final.

Turkey became only the second women’s side to retain their Paralympic title with a 9-2 win over Rio 2016 bronze medalists the USA.

Sevda Altunoluk scored all nine goals to finish as the top scorer with 46 goals.

Having beaten China in the showpiece five years ago, they joined Canada, who triumphed in 2000 and 2004, in winning gold at successive Games.

One Turkish debutant, Reyhan Yilmax said she did not feel any pressure beforehand, despite playing in the biggest game of her life.

“Absolutely not. I didn’t feel any pressure because I motivated myself to not be anxious on the field. I left that all behind.

The 19-year-old also hoped this victory could be a step forward in Turkish sport.

“As we win as many gold medals as we can, we can invite more people inside. When they see our victories, they want to be part of this sport and family.

“This was really important for Turkish blind sports, and many more people will want to feel these emotions.”

They had lost in the group stage to the USA, their first and only ever defeat at the Paralympics and Yilmaz admitted that defeat had stung for Turkey and ensured they had even more motivation going into the final.

“We were really angry after the group game and we really wanted to win. This game, we took the revenge.”

The USA had beaten Turkey in the group stage and claimed an outstanding semi-final in extra throws against Brazil but were brushed aside by the reigning champions.

Czechowski revealed how proud the achievement was, in such an illustrious career.

“It’s an honour to achieve this milestone. I have played with so many amazing goalball athletes from the United States, and competed against so many more. I’m so proud to be a part of Team USA and a part of our team.”

“We had such a tough journey to get to this gold medal game, every moment of every game meant so much to me.”

Japan won a second Paralympic bronze medal in the women’s when they beat Brazil 6-1 with Eiko Kakehata and Norika Hagiwara both scoring hat-tricks.

Eiko Kakehata had only scored three goals in the competition prior to this encounter but she had doubled that tally by half time in a remarkable individual performance. Kakehata’s contribution means that Japan matched their performance from Athens 2004.

Having scored a hat-trick in a 4-4 draw when the sides first met in the group stage, Norika Hagiwara repeated the feat in a stylish display.

Japan’s number six said they were wary of their previous match when they were 3-0 up but drew 4-4.

“We remembered the last match against Brazil so we made sure, after we scored early, to concentrate on our defense to eliminate any mistakes so we are very happy with that.”

“Goalball is not really that popular [in Japan] so I think our achievement could really send a message to people about how great it is.”

Japan’s Yuki Teema was unable to feature much during the tournament but was able to come on for the last minute, a moment which she cherishes.

“In the first match against Brazil I was injured and not able to help the team so I was disappointed and frustrated but coming on for the last 45 seconds was an honour and I have to thank my coach for allowing me to play.”

They became the first host nation in the women’s competition to claim a medal since China in 2008, with a stunning first half performance giving them a 5-0 lead as they bounced back from losing to Turkey in the last-four.

For Brazil, it is now consecutive Paralympics that they have lost at this stage, having been defeated by the USA on home soil in 2016. Their wait for a first Paralympic medal continues.

They had suffered a dramatic loss in overthrows against the USA in the semi-final and made a slow start here, conceding three penalties in the opening period alone. Although Victoria Amorin did score her sixth of the competition after the break, it was no more than a consolation.

Brazil’s Jessica Gomes admitted the persistent concession of penalties did not help their cause.

“The main reason for our defeat was definitely the penalties as we made a lot of mistakes and our objective was to minimise those errors.”

Ana Carolina Duarte is looking at the longer term plan and hopes their fourth-placed finish can help grow the sport in the country. The country’s goalball programme was only established in 2011, meaning they are one of the newest sides in the game.

“We have a very new team, Brazilian goalball has a lot of potential, it’s young and full of force.

“Regardless of the result, my gratitude is also because goalball is being broadcast in Brazil and around the world, the repercussions are a lot. It’s a lot of happiness, it’s a dream to have the sport recognised.”

Rio 2016 champions Lithuania claimed medals at successive Games as they beat the USA 10-7 to win the bronze medal, in a rematch of the final five years ago.

A double in the opening period from Nerijus Montvydas set them on their way. Second half hat-tricks for Genrik Pavliukianec and Marius Zibolis followed as they won their fourth Paralympic medal, after silver medals at Sydney 2000 and Beijing 2008.

Although they lost to the USA on home soil in a warm-up event for the Games, Lithuania have now claimed successive wins over Keith Young’s side, after inflicting an 13-3 mercy defeat in the group stage.

Having been present for all of the previous medal appearances, it is a record-equalling fourth medal for 45-year-old Genrik Pavliukianec. He matches the tally of the USA’s Jen Armbruster, Lisa Czechowski and Aysa Miller.

He admitted that the achievement had not quite sunk in yet.

“I need time to process the feeling but I’m sure in the next few days I’ll look back and be super, super happy.”

They had been on the brink of elimination in the group stage but Pavliukianec took pride in how they have turned it around.

“It was a tough start but a couple of wins gave us confidence and we are happy to beat the USA again after beating them in the Rio final.”

For the USA, they lost to Lithuania in a medal match for a second straight Games, having suffered a 14-8 defeat in the gold medal match five years ago.

Despite the defeat, Matt Simpson insisted they can take credit from their performance today, bouncing back from a semi-final defeat to China.

“We didn’t give up and we never stopped until the last throw and we didn’t today so we can be proud of how we played today and although there’s some plays we want back, we can control how hard we fight.”

Daryl Walker echoed those sentiments as they look forward to future tournaments.

“I’m proud of my teammates and coaches today, it was a hard-fought game but we played really well and this will give us confidence going into the World Championships. This isn’t the end for us, it’s just the beginning.”