The second day of competition in the 2022 IBSA Blind Football Men’s European Championship was marked by the defeat of the national team which is defending the title. Spain, after a tie in the first game against Poland, couldn’t overcome Romania and lost 1-2. The Romanian captain, Florin Kovacs, scored in the first half, but Julio Sanchez got the tie, which lasted a few minutes until Krisztian Kovacs signed the victory. Hard times for the current champions, who will play their next game against Germany. 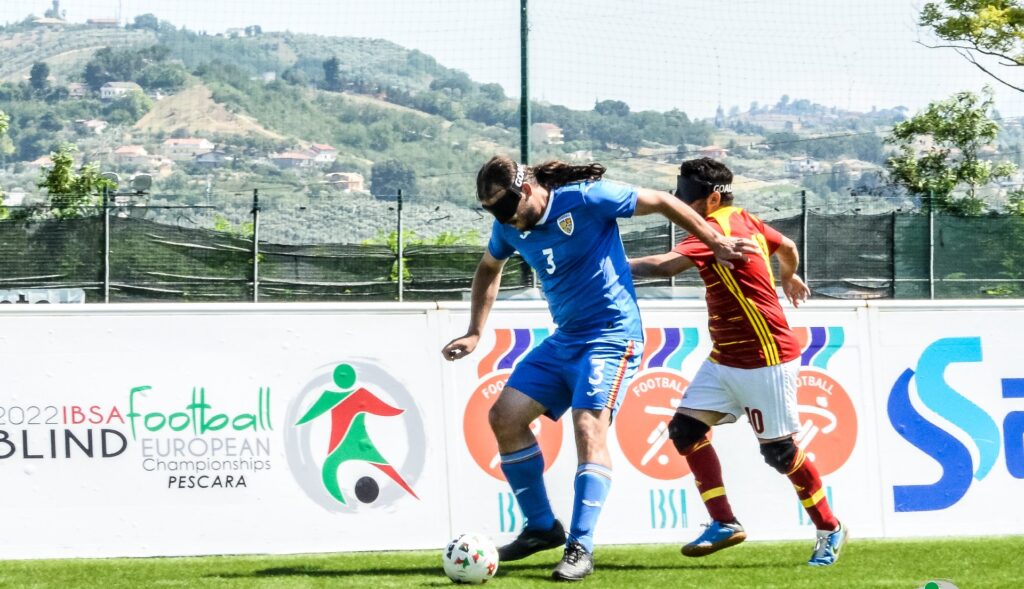 This was the third game of the day. Day 2 started with the clean victory of England against Poland (4-0). Roy Turnham scored twice, with Owen Bainbridge, and Dan English closing the count. It was the opening game for the team conducted by Tony Elliot, but they showed a solid performance aiming high in the competition. 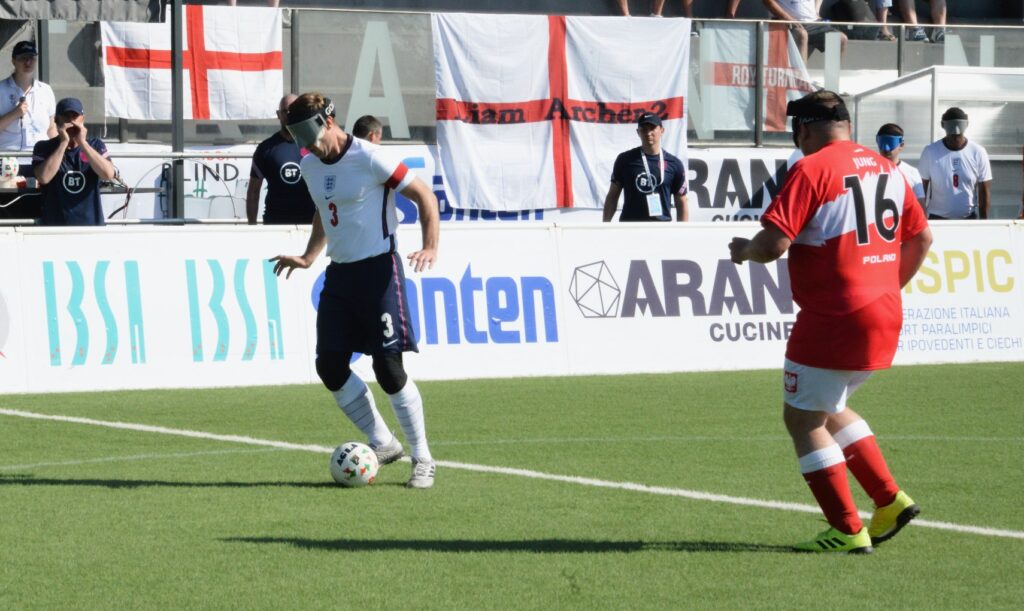 #Accessibility – English captain, Owen Bainbridge, is running with the ball with Polish Martin Jung around

In the second game of the day, the home national team, Italy, got another setback against Greece’s debut. After losing the first match with France, the Italians suffered almost until the end to get a tie (1-1). Adriano Bezhani scored in the first half for the Greeks, and with only a few minutes to the final whistle, again Paul Iyoboo saved what looked like a second defeat. Iyoboo was also the scorer of the single Italian goal in the first match. 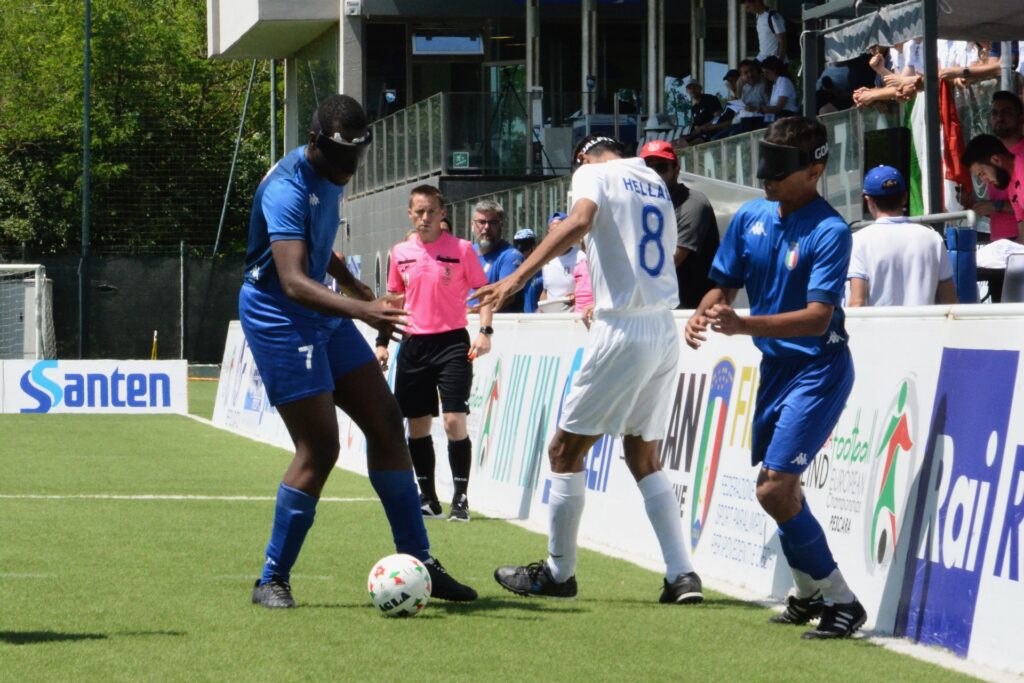 In the last game of the day, France easily built a victory (3-0) against the Czech Republic. The two French arrows of the attack, Arona Sow and Babacar Niang, gave the Czech defense a hard time, especially for the goalkeeper Radek Witkovsky, with a hand full of saves to avoid major damage. 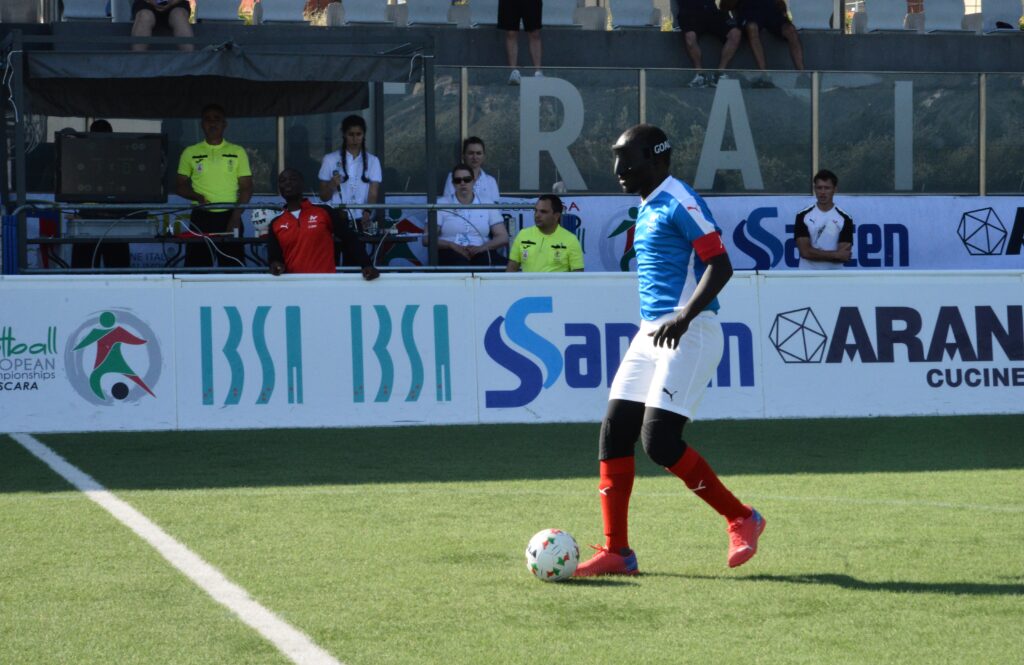 #Accessibility – French captain, Babacar Niang, is alone in the center of the pitch with the ball towards the Czech goal

It’s too early in the competition to start having the calculator working, but some results from these two days of the European Championship could be relevant in the near future.

This Sunday, June 12th, the calendar is the following (in CET):

Game 9
Romania vs England (9am) 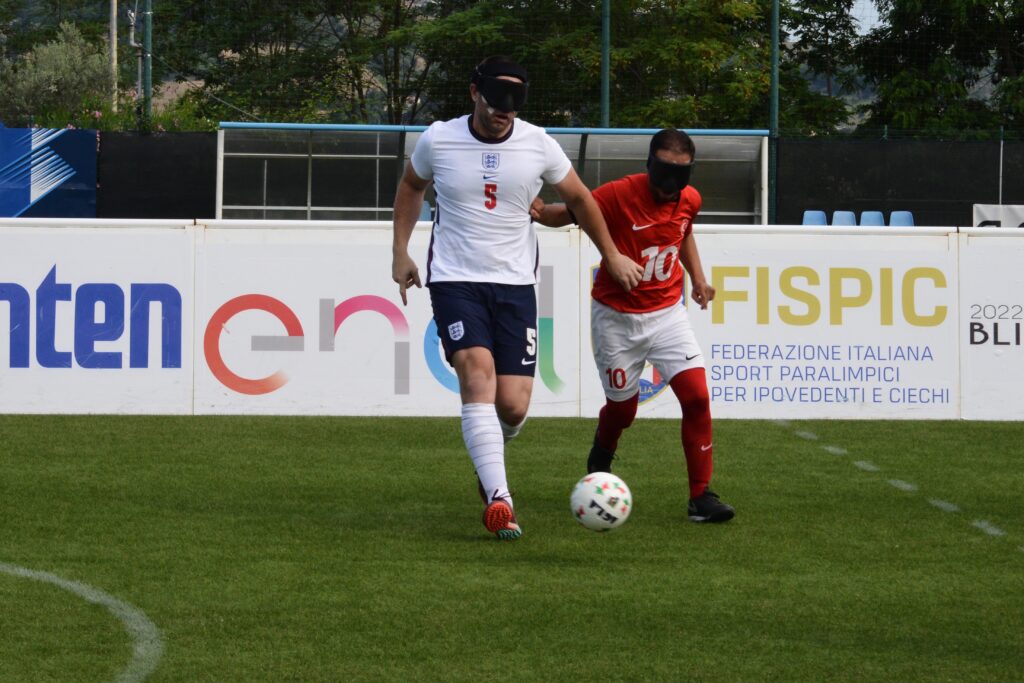 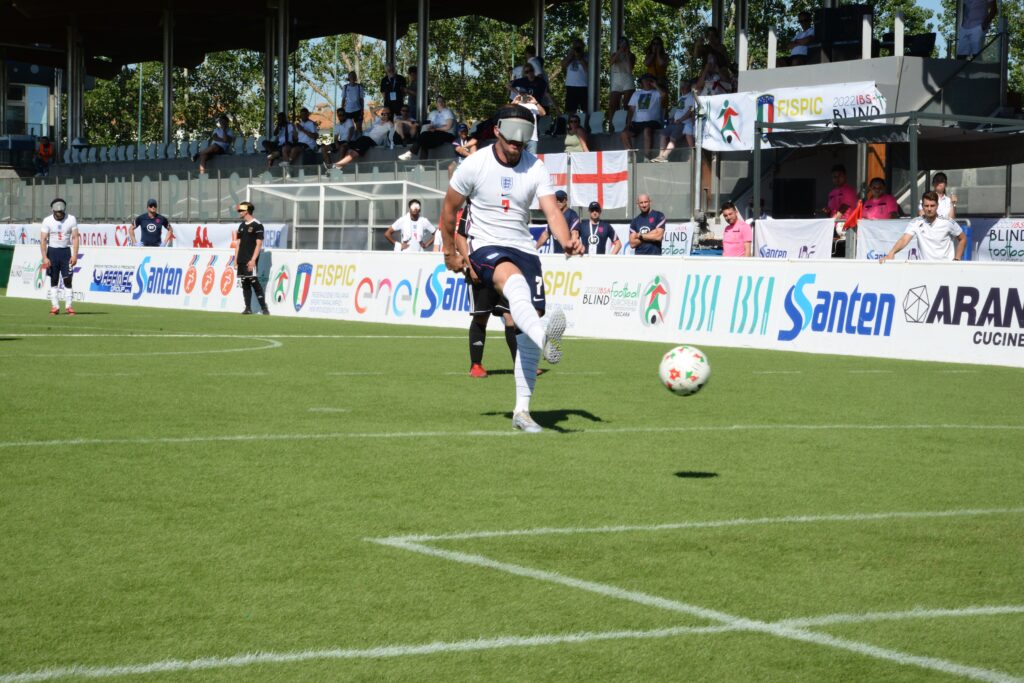 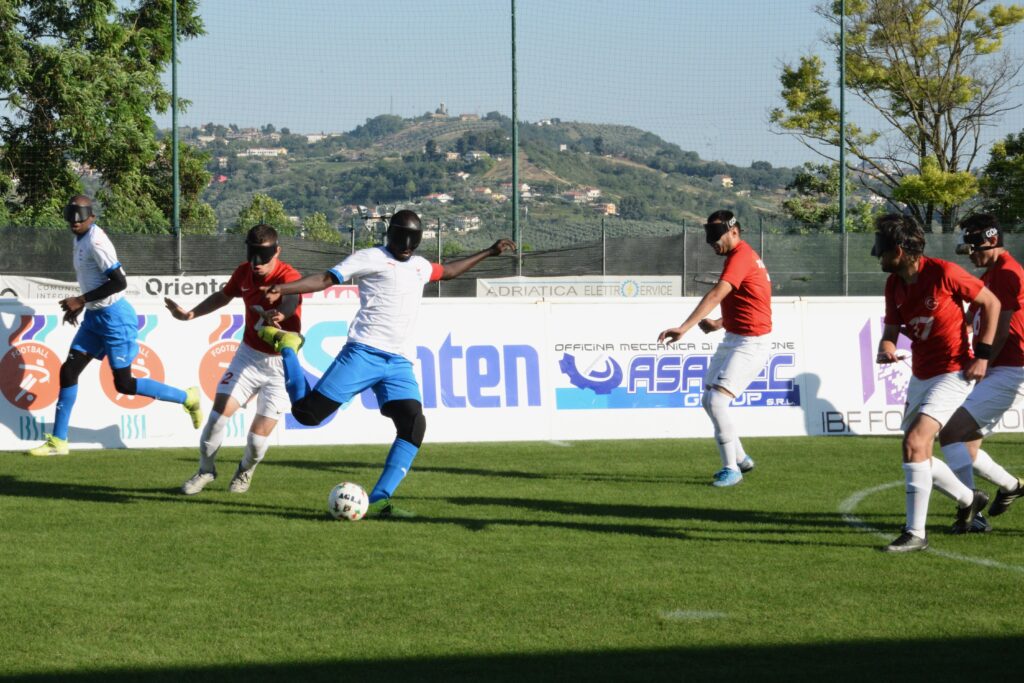 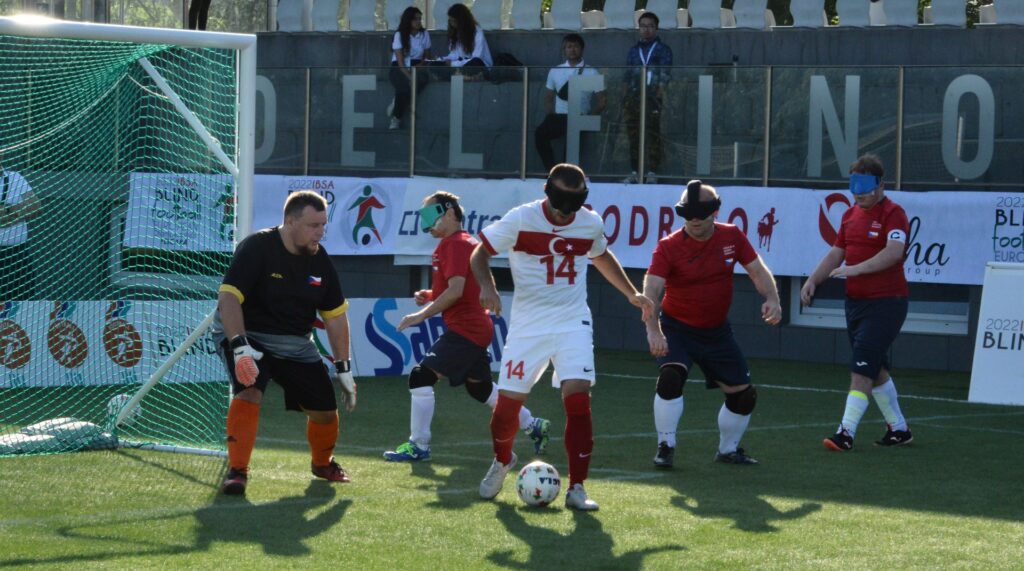 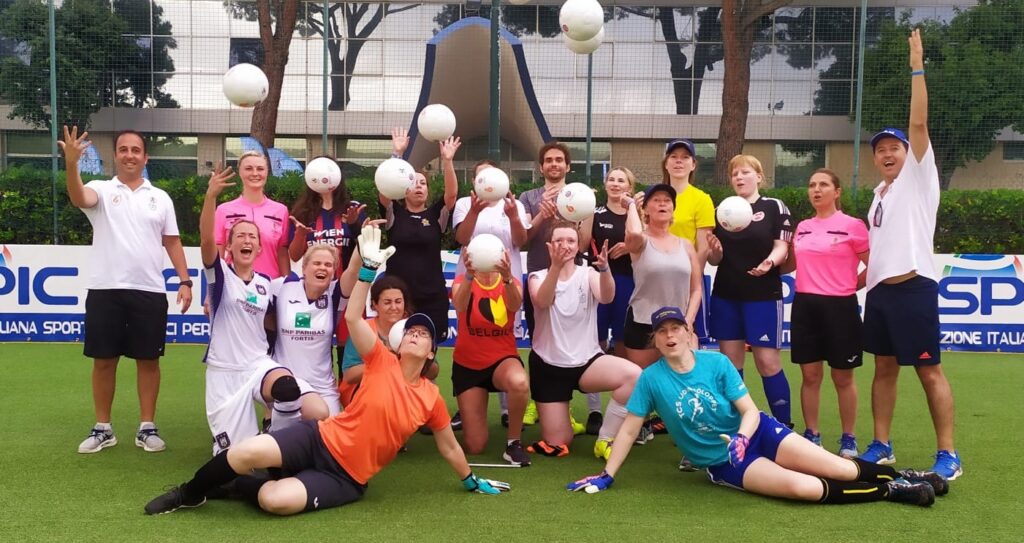