Home / News / A year to get better: Skelley ready for judo Grand Prix

A year to get better: Skelley ready for judo Grand Prix

The competition will be only the second to take place in more than a year, and for many the final chance to qualify for the Tokyo 2020 Paralympics.

Fresh from a silver medal in Baku, Azerbaijan, at the end of May in the men’s up to 100kg, Skelley feels that the break in the calendar has had its benefits:

“When I first found out the [Paralympic] Games had been postponed, there was a lot of upset and anger but actually one of my teammates said ‘it’s a year to get better.’ A year to iron out a few issues, make sure a few of those injuries were recovered and also spend time with your loved ones. It was a really big mental break as well. It was a blessing in disguise really and as much as it was heart-breaking it gave me a lot of time to improve on things. It might have come at the right time for me. It’s given me time to get stronger and fitter and really put in my best performance in Tokyo if I get selected.”

The IBSA Judo Grand Prix in Baku was a chance to test himself. Facing his arch rival Zviad Gogotchuri of Georgia in the final, Skelley was happy with his performance after some initial nerves.

“I was very nervous. I can only describe my first fight as it felt like my heart was going to come out of my chest. When I spoke to all my teammates they were the same. I was so nervous, I was sweating, I was shaking, sweaty palms. But as soon as I gripped up it was back to normal and it was really nice because the last 15 months have been really tough not having competitions. Especially in judo I get on with a lot of my competitors so it was really nice to see familiar faces again and catching up with everyone. It was really good to be back.

“I think it was a good marker. My first two fights were ok, a bit of rustiness coming out of me but then I was just really happy giving a good fight to Gogotchuri. He is the one to beat and I want to try and put my best performance against him.”

Despite describing Gogotchuri as “tough to beat” – Skelley has lost out to the Georgian six-times in his career – the 27-year-old is still confident he can overcome him.

“As long as I can keep my nerves against him and be confident in my judo and my abilities I do feel I can beat him. But he’s a tough guy and I respect him a lot. But it’s not just him…the category in itself is going through the roof. All the other competitors are getting better and better so I just need to make sure I’m improving every time and let’s just see what happens. I’m not just focusing on one person, there’s loads of good people in my category. So I just need to put in my best performance on the day.” 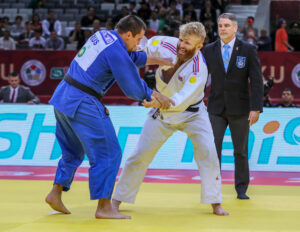 “I put myself out there”

So what does Skelley think makes his approach special, and has led him to the world No.1 spot?

Putting himself out there does not just apply to the judo mat. In September 2020 Skelley proposed to his girlfriend Louise Hunt, an experience he describes as traumatic and joyful in equal measure.

“I’ve never sweated like I did. I think I sweated more getting on one knee than I have fighting people. I’ll be honest, it’s a lot easier fighting someone than it is getting on one knee and proposing but it was one of the best experiences. It’s given me that time to really enjoy that side of my life. A lot of people would say that I’m really focused on judo and narrow minded so I think it’s given me time to grow a bit more outside of judo and spread my wings a little bit more. It was one of the best feelings and I was quite glad to get rid of the ring onto her finger because it was one of the most nerve wracking weeks of my life – I kept thinking where did I put it!?”

With Hunt and their dog Milo along with the training facilities and staff at British Judo, Skelley has the perfect platform from which to prepare for his Tokyo 2020 Paralympic campaign. The team as a whole are hoping to improve on their performance from Rio 2016, surprisingly leaving Brazil with no medals despite the top quality judoka in their ranks.

“2016 was hard, I was on the team then as well,” Skelley said. “To see my good friends not get a medal, it was tough and we took it hard. But it’s about how you bounce back and I think we bounced back well. I’ve matured a lot since then. I’ve had a lot of time to improve my judo and develop so let’s just see what happens. I’m going to be in the best possible shape and position for the Games. I just want to fight. I love fighting and doing what I do and competing for my country and British Judo and I just love what I do. Whatever happens, happens. As long as I put a good performance in.”

After the Grand Prix in Warwick just two months remain until Tokyo 2020 begins on 24 August. A short rest period will be followed by a gruelling final training period, putting the finishing touches to techniques and tactics.

“It’s going to be tough and it’s going to be hard. I know that my coach Ian Johns isn’t going to slack off. I know it will be the toughest 10 weeks of my life but I’m ready to do that. We’ve been waiting five years for the Paralympics to happen so I really want to put the best preparation and performance in. I’m just honoured to be representing my country and my family. I’ve been waiting for this.”

The 2021 IBSA Judo Grand Prix in Warwick runs from 19-20 June and will be shown live at the IBSA and Channel 4 YouTube channels. Skelley lines-up in the men’s up to 100kg on 20 June.